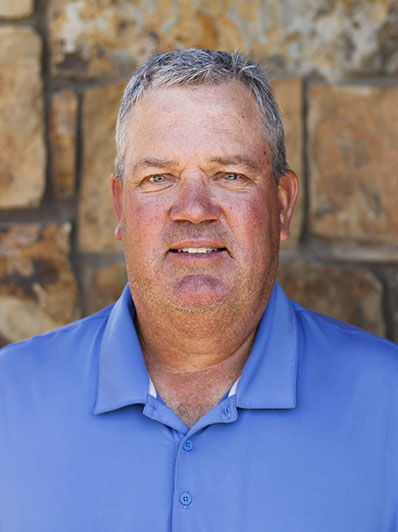 John has worked at Talking Rock for 15 years now after getting married and moving to the area from Southern California. He grew up and attended college at Cal Poly in San Luis Obispo, California. John’s first job was working at a municipal course near his home at the age of 14 picking up range balls. After college, he joined Troon and assisted in the grow-in process of two golf clubs in Scottsdale. Over his 25-plus year career, John has worked for Troon in California, Arizona, Florida, and Georgia. Back in the late ’90s and early 2000’s he was primarily building and establishing new golf courses for Troon. Following several moves, he accepted a job at Sherwood Country Club in California, where he met his future wife, who also worked at the country club. While working in Southern California he hosted several PGA events but prefers the Arizona high desert lifestyle now.

When not on the golf course and spending time with his twin daughters, John enjoys fly fishing in Northern California for the ever-elusive Steelhead and Salmon. He is also an avid golfer but admits to only playing 5 or 6 times per year. “When I do get to play, it is more about the camaraderie in your foursome than the location you play or the score you shoot”. Not surprisingly, John enjoys tending to his own lawn and landscape at home. “Someone has to have the nicest lawn in the neighborhood, it might as well be me”.